My little family has experienced so much joy, sadness, disappointment and relief in the past 12 months.  I am invigorated by the thought of a new year and what opportunities it will bring.

We are constantly presented with chances to redefine ourselves.  We know when one of these  occasions will present itself  as every January 1st we are confronted with the prospect of a new beginning, even if it is falsely placed there by a seemingly arbitrary date on a calendar.  This date has been so imbued with the essence of this new beginning that it has begun to actually carry meaning.  And so I do embrace it as a time to change things about myself that I want to change and to redefine my life in ways that are true to the vision that I have of myself, as opposed to the reality of who I am.

Consult not your fears but your hopes and your dreams. Think not about your frustrations, but about your unfulfilled potential. Concern yourself not with what you tried and failed in, but with what it is still possible for you to do.    –Pope John XXIII

So here’s a taste of my resolutions – who I want to be in this new year that will not be in so many ways defined my the challenges that the fading year presented.  These are not goals.  I cannot measure them but they are statements about who I want to be in the new year, from the inside out. These are all “I will” statements because they are about actions that I will take, things that I can change without other people.  They aren’t perfect and are sometimes a bit redundant, but the emphasis is there because I know it’s what I need.

Categories: Motivation, Stories from My Life | Leave a comment

An interesting idea about McDonald’s . . .

Drive Thru to Good Health, Part One of Two.

This is worth sharing – a definitely different view than the traditional one.  I’m really interested to see where his journey takes him.  I am of course no fan of McDonalds, but Taco Bell certainly calls my name.

Worth some thought most definitely! Is this something you would try? Could the basic idea be incorporated into your own health plan?

If you haven’t seen SuperSize me btw, its’ really worth a look.

LIFE IN THE NICU

It’s an out of body experience to be in the NICU. Here’s your new baby and you have to hold her with people around you constantly.  Even when you draw the curtain there is no privacy and even if there was, you’re scared to pick her up for fear of breaking her irreversibly.

Just before transfer to Duke

People constantly talked about hearing Hermione from across the NICU. She was just SO LOUD.

END_OF_DOCUMENT_TOKEN_TO_BE_REPLACED 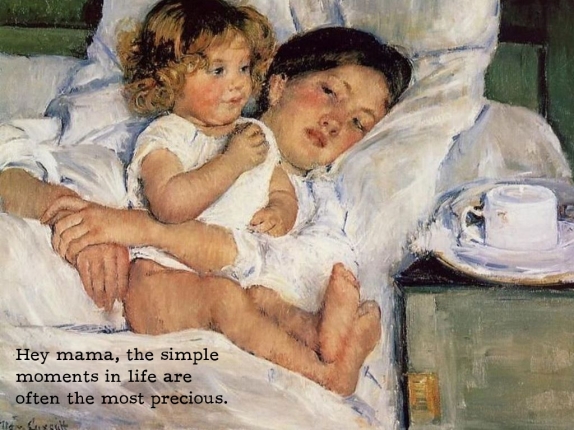 So I’ve been inspired by a meme.  There’s a blog out there going around that’s all about Ryan Gosling – clever phrases matched to pictures of the oh-so-hunky man himself.  This particular blog has some pretty rough language just in the title, so I’ll ask that you just google “hey girl ryan gosling” and you should have no trouble finding it. Each phrase begins with the words “hey girl” (obviously).

Here’s my spin on the idea – just simple phrases intended to invoke motivation, inspiration or maybe even laughter for all of you mamas out there.  Expect to see more of these because, well, I enjoy making them.

This image is of a mother of 7 and was taken in 1936 by Dorthea Lange.

I’ve been gone for a while, so before I jump back into blogging about health, I wanted to give a bit (well really a horribly lengthy) explanation.

We had a little girl on July 19, 2011! Life since then hasn’t been what we expected, so here’s the first of 3 posts that will tell you about our journey so far, and it’s been a crazy one.

Prior to birth, we had no idea that anything was wrong other than that she was small.  At 25 weeks we were admitted to Mission Hospital in Asheville, she was too small and we almost had an early induction. However they adjusted the due date instead and sent us home after two days.  We had a total of 7 ultrasounds during the pregnancy to monitor her growth and none showed any defects.

I ate well and exercised regularly, did my Kegels, kept hydrated, took my vitamins, got plenty of sleep.  All those things we do when pregnant to be the best for ourselves and our babies.

After what seemed like an endless last two weeks, Hermione finally decided it was time to come out to play.  We went into labor on our own at 41 weeks and were able to have a drug free, natural childbirth at Mission Hospital with her oldest brother, grandmother, great grandmother and father all there to witness it. Her gender was a surprise and we were all very excited to have a little girl!

Hermione just after she was born.

Within minutes of birth, the odyssey began. She was taken to the NICU because she was working too hard to breathe. It was there that a wonderful nurse discovered her cleft palate. Hermione has a cleft in her hard palate, so it’s not visible from the outside. After 4 hours of observation we were discharged from the NICU and sent to Mother/Baby.

There are lots of kinds of clefts, luckily Hermione's is fairly far back.

We never held her on Mother/Baby.  The nurses did their assessment and decided that she needed closer attention, saying she had too many secretions, so took her to the nursery. We were all well more than 24 hours without sleep so no one argued much. After a couple of hours it was decided to that she needed to go back to the NICU.

Her breathing was the issue and she was diagnosed with a Pierre Robin Sequence which includes a small lower jaw, a tongue which tens to ball up at the back of the mouth and fall back towards the throat, breathing problems and often a horsehoe-shaped cleft palate. 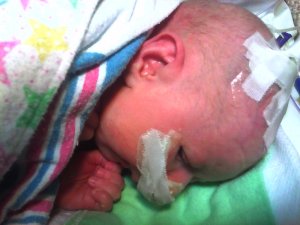 Hermione with her trumpette an IV.

Hermione was given a nasal trumpette (a tube through her nose) to help her breathe.  We were only able to hold her for very limited periods – her father didn’t get to hold her until she was three days old. She was fed through a tube in her nose and an IV directly into her veins.

It was decided to wait her out for a couple of weeks as some Pierre Robin babies outgrow the breathing issues. She had several dramatic drops in oxygen saturation, having to be bagged twice. Her color would change, she’d turn pale or dusky, even blue and purple when her oxygen went down. It was a constant battle to keep her oxygen levels at a high enough level to avoid brain damage.  She would often have a desat just from being touched.

A rare moment holding her in those first two weeks.

So there’s the story of the first two weeks of Hermione! Stay tuned for the rest of the story of our three and a half month hospital journey with Hermione. 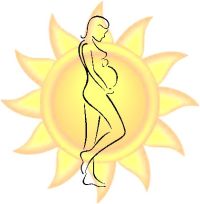 Error: Twitter did not respond. Please wait a few minutes and refresh this page.

Welcome -please email me and leave your comments! 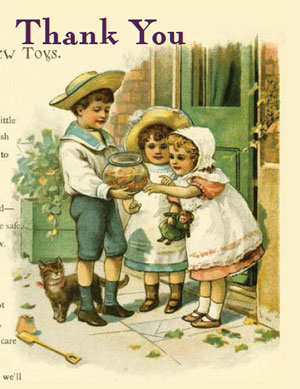